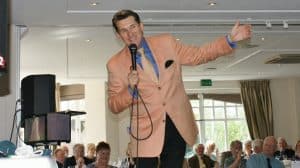 The performance at Cromer & Sheringham Probus Club’s 40th Anniversary Celebration by Olly Day was “entertainment personified” according to one of the Probus members present.

Almost 100 members and guests attended at the Links Hotel in West Runton on 5th May. The host club had extended an invitation to the Holt and Kelling Probus Clubs to join the celebration and they were both well represented. As a result, seating arrangements could be made for each table to have members of at least two clubs dining together.

The Probus members, their wives / partners, and other guests enjoyed an excellent lunch before Olly took to the stage and provided great entertainment in what can only be described as a one-man variety act; he told jokes, sang a few songs, performed some magic, and his comedy ventriloquism act was enjoyed by all, but particularly by those sitting at the “dummy’s” table.

Geoff Mather, the Cromer & Sheringham chairman, had been the instigator of the celebration which was organised by the Lunch Secretary, Dave Vickery. Geoff acted as host for the event and presented Dave with a bottle of champagne in recognition of the effort he had put in and the successful outcome.

Mike Bennett, the Kelling chairman, thanked the whole of the Cromer & Sheringham Club on behalf of all the guests and congratulated them on the success of the occasion.